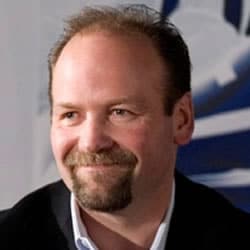 Wendel Clark, former team captain and one of the most beloved players in Toronto Maple Leafs history, retired from the National Hockey League following the 1999/2000 season. Clark's rambunctious style of play endeared him to the fans during the 13 seasons he spent with the Leafs.

Clark's return to Toronto in his last season of play brought full-circle a career that began in 1985 when he was selected first overall by Toronto in that year's draft. In 793 career NHL regular season games spanning 15 seasons, Clark recorded 330 goals, 234 assists, 564 points and 1,690 penalty minutes. He was named to the NHL All-Rookie Team and was second in voting for the Calder Trophy. He was selected to the NHL All-Star Game in 1986 and 1999.

Clark now works as a Toronto Maple Leaf ambassador and spokesperson for a number of Canadian corporations.