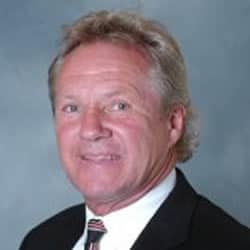 Darryl Sittler is one of the greatest players to ever wear the Toronto Maple Leaf uniform.  The former centreman was Toronto's first choice, 8th overall, in the 1970 Amateur Draft and in 1980 he embarked on a career that led him to the top of the Leafs' All-Time Points List and Goal Scoring List.  In 844 games with Toronto, he recorded 389 goals and 527 assists for 916 points.  In 1977-78 he amassed career highs in points (117), goals (45), assists (72) and penalty minutes (100) while playing in all 80 games.

The native of Kitchener, Ontario may well be remembered for two of the most historical performances in the history of the National Hockey League.  On February 7, 1976, Sittler scored six goals and added four assists for an NHL record total of 10 points in a game versus the Boston Bruins at Maple Leaf Gardens. That spring, the team leader joined Maurice Richard in hockey history by recording five goals in one playoff game against the Philadelphia Flyers.  Darryl's place among the sport's all-time greats came in 1989 with his induction into the Hockey Hall of Fame and in 1995-96, Darryl was voted by fans as the centreman on the All-Time Leafs Team.

Sittler returned to the Maple Leafs in 1991 and the former captain is now assisting in the areas of Marketing, Community Relations and Alumni Relations.

With a wonderful blend of sincerity, credibility and wit, Sittler translates hockey stories of teamwork and motivation into a highly listenable and inspirational message for diverse audiences.

"Darryl was GREAT!!! A terrific guy! Very professional and personable. His experience at doing this type of thing was clearly evident simply by some of the little things he did, such as making sure that visitors got their best pose for the camera, especially with kids....It was terrific having him -- a laid back, down to earth, a gentleman... Our people here were very impressed with him. Thanks to you and Darryl."- Fort William Historical Park