The Goal of the Century!, '76 Series Hockey Player 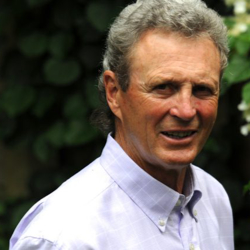 Paul Henderson became a Canadian sports legend in September, 1972. His goal, with 34 seconds remaining in the final game, lifted Canada to victory in the "Series of the Century", against the Soviet Union. Incredibly, Paul scored the winning goal in each of the last three games of this historic first series between the two superpowers of hockey. That magical moment in Moscow is still considered the greatest in hockey history. A member of the Canadian Sports Hall of Fame, Paul Henderson knows the importance of leadership, teamwork and commitment.

In 1997, on the 25th Anniversary of The Goal, Paul was immortalized on a postage stamp issued by Canada Post and a silver coin by The Royal Canadian Mint.

Today, Paul uses the lessons of leadership, teamwork and commitment he learned during the 1972 Summit Series and his 18 year professional hockey career, to motivate organizations around the world to reach their own goals. Paul begins his presentation with a brief video reliving the rush, glory and heart-pounding excitement of the '72 series. Through his sharing of behind the scenes NHL strategies, innovative insight, and humorous anecdotes, Paul correlates his own experiences to today's competitive business environment.

Paul is a member of the Canadian Sports Hall of Fame. He has been battling leukemia since 2010.

Scoring Goals in Business - The Importance of Teamwork

The Goal of My Life

"His ability to merge our company history and future goals into his own real life experiences, was a terrific approach and definitely well received." - ICI Paints

"Paul's ability to enthuse and educate us with his accomplishments, life guidelines and humorous stories were the right stuff. Our Jumbo Video franchisees were thrilled to meet the man and the hockey legend. This coupled with Paul's welcoming personality and his willingness to meet for autographs and photos, was really appreciated by all." - Jumbo Systems Inc.

" Paul is not only a great Canadian, he is an individual who cares about people and spent a considerable amount of his personal time meeting with our people. His message on winning in a team-based situation was inspirational. His recollections about his days in hockey, the people he played with and against, and especially the Canada-Russia series were things that every Canadian in the room could relate to." Toronto, 1996.