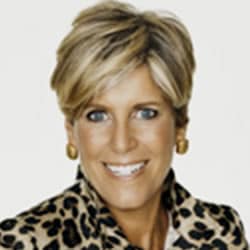 Suze Orman is a bestselling author on personal finance, a financial advisor, and television personality who has given thousands of speeches and talks both on and off television on the subject of credit, investments and banking. She has amassed a large following due to her own investment success and easy-to-follow financial strategies designed for average individuals.
Orman was born in Chicago to parents of Russian-Jewish heritage. In her youth, Suze had difficulty forming words, leading to challenges with reading and writing. Despite her scholastic struggles, Suze was accepted into the University of Illinois at Urbana-Champaign. She worked as a dishwasher in the campus cafeteria to help pay her bills.

Orman studied for a degree in social work but failed to complete her requirements, missing a class in foreign language. Instead of staying to finish, Suze Orman and some friends packed a van and moved out to Berkeley, California in 1973. She became a waitress at the Buttercup Bakery, during which time she completed her degree by taking a Spanish class at Hayward State University and was awarded her diploma from the University of Illinois in 1976.

She stayed at the Bakery and dreamt of opening her own restaurant. A sympathetic customer loaned Orman $50,000 to help her start her own business and Orman invested the money with the brokerage firm in order to start the process. Within three months the broker with whom Suze Orman had opened her account had lost all her assets in a falling market and Orman was once again broke. She needed to pay off the loan but knew it was impossible with her job at the Bakery.

Convinced she could work as a stock broker, Suze Orman applied for a job at Merrill Lynch. Although her supervisor was reluctant to hire her, she got the job and began studying finances. She left the firm in 1983 and took the position of Vice President of Investments at Prudential Bache Securities. Four years later Suze Orman opened her own firm, the Suze Orman Financial Group. She acted as Director of the firm until 1997 when she decided to focus more on her writing and speaking career.

Her most notable books include The 9 Steps to Financial Freedom, The Courage to Be Rich, and The Road to Wealth. After her publishing success, Orman began hosting a weekly television show on CNBC titled The Suze Orman Show and another on QVC titled Suze Orman's Financial Freedom.

A two-time Emmy Award-winning television host, New York Times bestselling author, columnist, writer/producer and one of the top motivational speakers in the world, Suze Orman is undeniably America's most recognized expert on personal finance. She has been called "a force in the world of personal finance" and a "one-woman financial advice powerhouse" by USA Today.

Business and The Economy

The 9 Steps to Financial Freedom

The Money Book for the Young, Fabulous and Broke

Women and Money: OWNING THE POWER TO CONTROL YOUR DESTINY

"We at Fidelity Investments want to thank you for speaking at our recent series of 'Plan For Life After Work' seminars this past fall. Your practical, no-nonsense financial advice, and your ability to connect with our audiences was precisely what we were looking for. Your enthusiasm for your work, and for helping people help themselves, was evident to all who attended. Our guests couldn't sing your praises enough, and for that we are truly appreciative." Fidelity Investments

"I just have to write and tell you what a fabulous job Suze Orman did at the H&R Block Franchise Forum in Las Vegas. We couldn't have scripted her presentation to even compare to the entertaining, heartfelt and inspiring delivery she made to the group. Her warmth, honesty and financial knowledge were the perfect fit for our audience." Group One Response Marketing