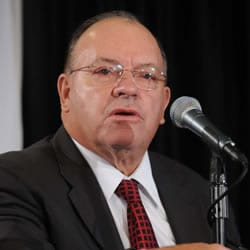 A larger-than-life figure, Scotty Bowman is the "winningest" coach in NHL history. Bowman has made 28 total playoff appearances and won nine Stanley Cups in all. He has won the NHL Championship with three different teams, a feat that has not been matched by any other coach in the NHL, NFL, NBA or MLB. He is a living legend in the world of professional sports.

Two Jack Adams’ Awards and his induction into the NHL Hall of Fame have endorsed Bowman’s skills as a coach. During the 2002 season, Bowman announced he would retire from coaching, but resolved to win the Stanley Cup one last time with the Detroit Red Wings. As a true Scotty Bowman endorsement, his team came through and took home the championship, validating Bowman's extraordinary leadership abilities.

As a speaker, Bowman will inspire your employees to reach new heights of success and learn from his exceptional leadership abilities. It is not only die-hard hockey fans who will appreciate Bowman's mastery on ice; it is also for those companies or organizations who want the insight of a time-tested and proven winner. The same values that Bowman used to capture nine Stanley Cups will improve your company's bottom line and will fill your audience with a great sense of pride and a desire to replicate Bowman’s success in their own endeavors.