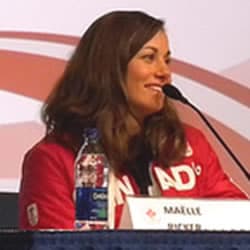 Just shy of a medal at both of her previous Olympic Games and after suffering frustrating crashes, Maëlle Ricker thrilled Canadians as she reached the Gold Medal podium at Vancouver 2010 in front of a home crowd in British Columbia. With that win, Ricker became the first Canadian woman to earn an Olympic gold medal on home soil.

Growing up among the mountains of West Vancouver and Whistler, Maëlle Ricker's love of the outdoors developed at a young age. Consistently trying to keep up with her older brother, Maëlle eventually followed him into the world of snowboarding, swapping racing skis for a board, and icy racecourses for fresh powder.

Just four years ago, in Torino, Ricker suffered a devastating crash at the Olympics, taking her out of the medal run. She had the fastest qualifying time to enter the Olympic final, but with her crash she had to be airlifted to the hospital in Torino.

In 2010, she managed to come back from a crash in her first qualifying run to earn a spot in the quarter finals. Ricker took to the challenge and earned the third fastest qualifying time of the day, in order to compete and earn her follow-up Gold Medal run.

Ricker stated after the race: "That was heartbreaking after that first run. I had to go back up to the start, refocus and think about my lines. I had to visualize all the stuff we've been training all week, all year, the last few years."

Maëlle has been a trailblazer for women's snowboarding, competing at both the inaugural snowboarding halfpipe event at the Nagano Olympic Games in 1998 where she finished fifth, and in the first-ever Snowboard Cross event at the Torino Games in 2006.

Determination in Going for Gold