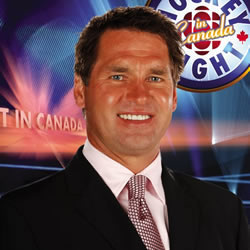 In July of 1998, goaltender Kelly Hrudey retired from the NHL and traded in his skates for a microphone joining the cast of CBC's Hockey Night in Canada as a full-time analyst.

Hrudey came to broadcasting after a fifteen-year career as a goaltender for the New York Islanders, LA Kings, and San Jose Sharks. He compiled a record of 271-265-88 with a goals against average of 3.43, with 16 shutouts. By providing hockey fans with some of the most insightful, well-researched and accurate commentary available, he was able to parlay his experience and knowledge of the game of hockey with a career in front of the camera.

In addition to his role as an analyst, he has donned a number of other hats at Hockey Night in Canada. During the 1999 NHL playoffs, Hrudey's segment "Behind the Mask" became a regular feature on Hockey Night in Canada. During the 2000-01 NHL season, Hrudey co-hosted a feature - "After Hours." The show presents a strong interactive component, responses to viewer e-mails and the results of a daily viewer's poll conducted on the internet.

A thoughtful and charming on-air persona, he is equally talented on stage in front of a live audience.

Hrudey's keynote speeches are entertaining, humorous, and above all, fun, and a hit with fans and non-fans alike. He takes his audiences behind the scenes of Canada's national game, exploring the personalities, drama, and excitement of professional hockey. His stories touch on the famous, and the infamous, the legendary stars and the hardworking role players. It's a performance that audience members will be talking about for a long time to come.