Sportscaster for CTV and TSN 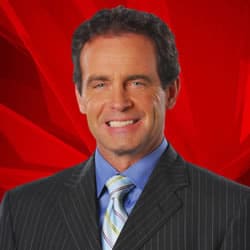 In his distinguished 26 years of covering the wide world of sport, Rod Black has virtually done it all.

From the Blue Jays to the CFL, the Raptors to figure skating, the Stanley Cup Playoffs, tennis, golf, boxing, and of course the Olympics, Canada's most versatile broadcaster has had a front row seat to observe and call all of sport's major events.

Black covered the Olympics, including the 2002 Winter Games in Salt Lake City, the 1994 Winter Games in Lillehammer and the 1992 Summer Games in Barcelona. In 2012, he is the play-by-play announcer for the London Olympic gymnastics.

Black received the 2005 Sports Media Canada Award as Most Outstanding Sports Broadcaster. He is a consummate professional who displays passion and excitement in all that he does.

Black's broadcasting abilities aren't limited to the sports world. The adaptable broadcaster is the former co-host of Canada AM - Canada's most-watched national morning show. As well as host and narrator of a variety of prime time specials on CTV and TSN (including Skate the Dream and Hero and Friends).

Black is a recipient of the Queen's Jubilee medal for his work for Foster Parents Plan of Canada. He is a five-time Gemini Award nominee for Canada's Best Sportscaster.

"While I'm not in the habit of sending fan letters to anyone, I must commend Rod Black as MC at the Sea King 50th Anniversary dinner in Halifax. With equal measures of formality, comedy and tribute to those present he carried the whole evening superbly. The poem to being Canadian was the best I've ever heard." - Bob Stewart, Lt. Cdr, Retired Sea King Pilot