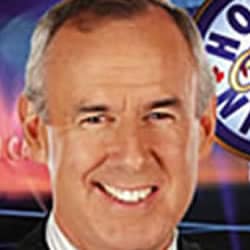 Ron MacLean is best known as the straight man on Coach's Corner, the listener, and some might argue the voice of reason that saves Don Cherry from getting a puck in the head.

MacLean's broadcasting career began in 1978 when he took a part-time position at CKRD Radio in Red Deer, Alberta. In 1984, a producer saw MacLean doing an ad-lib weather forecast and hired him to host the Calgary Flames telecasts on CFAC, an independent TV station in Calgary. MacLean then became the sports anchor on the local evening news.

After joining the CBC network in 1986, MacLean hosted the Toronto Maple Leafs' telecasts on Hockey Night in Canada before becoming the full-time national host in 1987.

The Gemini Award-winning sportscaster has expanded his professional duties to include hosting CBC's coverage of the Summer and Winter Olympics, Calgary Stampede, Commonwealth Games and World Track & Field Championships. In his spare time, he is a Level 5 referee for the Canadian Amateur Hockey Association.

In January 2002, MacLean hosted the third annual CBC Hockey Day in Canada extravaganza, from Windsor, Nova Scotia, that took viewers across the country for a glimpse at hockey's impact and its prominent place in Canadian communities.

As a host, master of ceremonies or featured speaker, Ron's quick wit, thoughtful insights, and humorous, engaging style has entertained audiences from coast to coast.