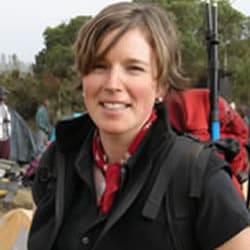 Shaunna's passion for the mountains has led her to become the second Canadian woman in history to summit Mount Everest. This success on May 30th 2005 was the culmination of a very distinguished climbing and academic career. Some of her climbing highlights include a successful ascent of Mount Elbrus, Europe's highest peak, and the difficult traverse of Mount Blanc from Italy to France. In the fall of 2003, Shaunna climbed Everest to 26,000 feet as part of her research related to what motivates Everest climbers. In 2004, she was a main character in The Discovery Channel documentary mini-series that was filmed on Mt. Everest titled "Ultimate Survival: Everest" and continued to make history by conducting her research while on the upper reaches of the mountain. This body of work that was continued during her successful bid in 2005 has become widely known as "Sport Psychology: Science in the Death Zone." What separates Shaunna from other academics and/or climbers was her ability to be "in Situ" or "in the moment" collecting her data while she and the other athletes were participating. This is cutting edge science and further opens the window into a greater understanding of the psyche of sport.

Shaunna is currently working on a three year research project with breast cancer survivors on Mt. Kilimanjaro in Africa. She completed her Master’s degree and PhD on the sport psychology of Mt. Everest climbers at the University of Ottawa and has presented her work at numerous conferences around the world. She completed her undergraduate degree at McGill University in the Faculty of Psychology, where she was both a member of the rugby and ski teams. She is a former member of the Quebec Alpine Ski Team and represented Canada at the World University Games. She also received a skiing scholarship from Sierra Nevada College in the United States where she was an Academic All American for three consecutive years.

Shaunna is an established motivational speaker using her experiences on Mt. Everest as a metaphor for overcoming the challenges of life. Set against the backdrop of a dynamic and powerful video that was filmed in part for the Discovery Channel her talks are always tailored to fit the audience that she is addressing. Anecdotal in nature, with a strong scientific foundation, Shaunna is able to not only explain what happens in the minds of someone in the midst of struggle but is also able to supply the answers on how to overcome them. This is an enticing mix of teaching and entertainment.

"We have hired Dr. Burke many times of the last couple of years. Her easy going and self effacing manner resonated deeply with our audience. Based on strong scientific background, she has the rare ability to entertain, educate and motivate all at the same time. What a remarkable woman!" Canada Motor Car