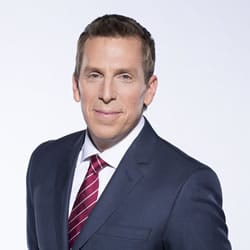 James Duthie is the popular host of TSN’s extensive and award-winning hockey coverage. He also contributes to key CFL ON TSN events, including the playoffs and Grey Cup.

Duthie’s entertaining and sharp-witted style continues to make him a fan favourite across Canada and one of the most-followed media personalities on Twitter.

His natural charisma and extensive history in sports broadcasting allow him to gain exclusive interviews with some of the biggest stars in sports and entertainment.

Duthie’s work has earned him multiple awards including three Geminis, a Canadian Screen Award, and the Excellence in Sports Broadcasting award from Sports Media Canada.

James is also the host of the Rubber Boots Podcast.