Host of The Amazing Race 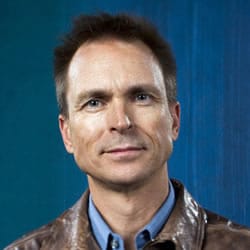 Phil Keoghan is best known for his role as host of Jerry Bruckheimer's television show, The Amazing Race, which has won six Emmy Awards and is now in its 14th season.

Phil's life has been full of travel and adventure. He started traveling at the age of two accompanying his father, a plant scientist and mother who taught music, to third world countries all around the world. Phil started working as an assistant camera operator for Television New Zealand before being picked to host, Spot On. He has gone on to work in over 100 countries around the world as a motivational speaker, author, television host, actor, producer and cameraman on thousands of program episodes.

A pivotal moment in Phil's life came after a near death experience at the age of 19 when he found himself lost at 120 feet inside a 22,000 ton ship wreck. Surviving this life changing experience prompted Phil to write a list of things to do before he died and develop a philosophy he calls No Opportunity Wasted, or NOW for short.

Phil's NOW philosophy is about learning how to live while you still have the chance, letting go of the handrails, thinking outside the box and using your imagination as your currency. As an avid adventurer, Phil co-created and co-produced a number of original television series including: Short Sportz, a sports show encouraging kids to get involved in sports; Keoghan's Heroes, featuring top thrill seekers around the world; E-Team, an environmental pilot; The Human Edge, profiling innovative people for National Geographic; and Phil Keoghan's Adventure Crazy, which airs around the world on The Discovery Networks.

Phil's passion for life prompted Oprah Winfrey to invite him on the show to talk about his life philosophy and he has recently made frequent appearances. In one episode, he was asked to help a woman, terrified of heights, rappel from the top of America's tallest bridge. Phil is also a regular motivational speaker having appeared at a number of major colleges and numerous corporate events throughout the U.S., New Zealand, Australia, South Africa and Canada.

In 2004, Phil released a self-help book called, No Opportunity Wasted, NOW, (8 ways to create a list for the life you want). The NOW book was a bestseller in New Zealand and Australia and was developed into a television series for The Discovery Channel. The US television series was honored for excellence at the Banff Television Festival. The NOW format was produced for network television in New Zealand and is currently in development with CBC in Canada.

Originally from New Zealand, Keoghan lives with his wife and daughter in Los Angeles.

How to Face Your Fears & Test Your Limits

"I cannot say enough good things about Phil Keoghan. He took the time to customize his message for our audience, going WAY beyond the usual "insert industry name here" approach. He delivered an inspiring & entertaining speech that obviously hit home, as we heard attendees talking afterwards about making their lists! Beyond being an excellent speaker with a meaningful message, Phil was simply a pleasure to deal with. He's on my (very) short list of speakers to invite back for this event in the future. Thank you!" American Institute for CPCU/ Insurance Institute of America

"Phil was just wonderful! Thanks for all of your help!" Motorola

"The event was very successful & we've had a ton of great comments about Phil's presentation. The entire event went extremely well -- we now have exhibitors wanting to sign up immediately for next year's event! Thank you again!" Evansville Courier & Press

"Phil was awesome! Over the following few days at the conference, we received non-stop positive feedback on his presentation & everyone is making their lists. Thanks for everything!" iCONECT Development LLC

"Thank you very much for hosting our Annual Gala Dinner. We all enjoyed the way you framed the evening and kept the show on schedule. Thank you for helping make our event such a great success!" Anti-Defamation League