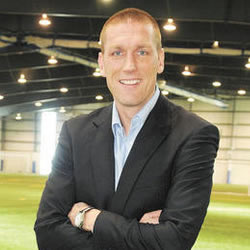 After a professional soccer career that spanned 18 years, Jason deVos knows all about commitment, leadership and battling adversity.

deVos signed his first professional contract at the age of 16, and moved to England to continue his journey to the highest level of the game at the age of 22.

After a successful 18 month spell at Darlington FC, the defender moved on to play for Dundee United of the Scottish Premier League and Wigan Athletic and Ipswich Town of the English Championship. He was recognized very early on in his career as a leader, and was named captain at Dundee United, Wigan and Ipswich.

deVos also tasted success with Canada's National Team. After making his debut in 1997 against Iran, he went on to play for Canada 49 times over a seven-year period, scoring 4 goals, before retiring from international play in 2004.

From 1999 until 2004, deVos was also the captain of Canada, leading them to their only international championship. He scored the winning goal for his country in the 2000 Gold Cup Final, was twice named to the Gold Cup All-Star team and led Canada to the 2001 Confederations Cup in Japan.

Known as a tough, intelligent player on the field, deVos has brought the same passion and commitment he demonstrated as a soccer player to his new career in the media. He currently works in television as a soccer analyst for CBC and GOL TV, where he provided television commentary for the 2010 World Cup in South Africa, and continues to cover Toronto FC Games.

"Thank you for speaking to the group today. We have had alot of very positive feedback fromour team - they found you to be informative, 'down to earth', interesting and motivational. A really good day on our end. Thank you very much." John Hancock Financial Services