Premier Golfer and Member of the Order of Canada 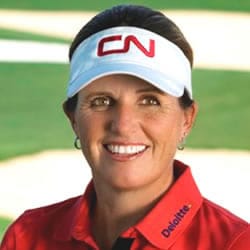 Lorie Kane is among Canada's premier female golfers. Born in 1964 in Charlottetown, Prince Edward Island in an athletic family. Lorie was a multi-sport athlete for much of her career at the Acadia University of Nova Scotia. She excelled at both hockey and golf, though it was the latter that ultimately proved to be her true calling.

Turning professional in 1996, Lorie took the golf world by storm, taking home the LPGA's Rookie of the Year honour. She has since gone on to win four times on the TOUR, and ranks 14th in all-time career earnings.

Lorie is heavily involved in charitable pursuits, and hosts an annual tournament to benefit KidSport PEI and the ALS PEI Foundation. In recognition of her contributions to Canadian sport, she was awarded an honorary degree from the University of Prince Edward Island in 2002, and called to the Order of Canada in 2006. Her personality, charm, and zest for life make her a fan favourite and the consummate corporate host. She currently partners with CN, Anheuser Busch, Tabi, Titleist, and Rodd Resorts.

"I was very impressed with the Women of Influence Luncheon... the keynote speaker, Lorie Kane, did an outstanding job addressing the 800 plus guests at the luncheon, talking about her story of the road she took to success as a golf professional." UOIT Athletics.