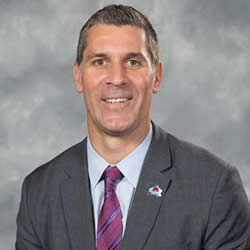 If you are not familiar with Jared Bednar and his coaching career before Colorado, he had a history of working his way up. He worked through the ECHL starting as an assistant, moving his way eventually to head coach of the 2008-2009 Kelly Cup winning South Carolina Stingrays. Bednar’s next move was to the AHL and later he became head coach of the Lake Erie Monsters, winning the Calder Cup in 2015-2016.

There is something to be said of a guy who has worked his way up the coaching ladder like Bednar did – and won while doing it. Let Bednar share his secrets of success and tenacity.

Considered a very demanding coach but fair to the players, Bednar played Junior hockey and was considered a very physical player. His playing years, combined with 14 years of coaching in the minors, led him to the head coaching job of the Avalanche in 2016.

Bring the excitement of the NHL and the cache of a NHL celebrity to your events, golf tournaments or corporate dinners by having Jared Bednar act as your host, emcee or engage in a meet and greet.  As a local native to Yorkton, Saskatchewan, his ties to his community, success in the big leagues and his compelling, personal stories make Jared Bednar a great speaker, as well.