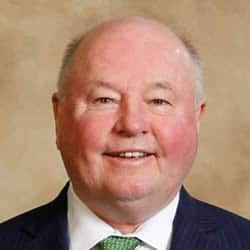 In the past 44 years, Bruce Boudreau has played for 17 teams and coached 10. He is also a member of the Hockey Hall of Fame. Through his unparalleled hockey career he has amassed an encyclopedia of stories. As a teenager, the Marlies’ trainer dubbed Boudreau “Gabby,” a nickname he has to this day. His passion for hockey and the people in the game oozes with his every breath. Skilled in leadership and determination he delivers his message sprinkled with stories and highlights that are sure to delight any crowd.

Bring the excitement of the NHL and the cache of a NHL celebrity to your events, golf tournaments or corporate dinners by having Bruce Bourdreau act as your host, emcee or engage in a meet and greet. As a local native to Windsor, Ontario, his ties to his community, success in the big leagues and his compelling, personal stories make Bruce Bourdreau a great speaker, as well.

What’s it really like to run a professional NHL team?  Look behind the boards to hear tales from the bench, locker room and about the players themselves. This unique insight will provide you with lessons on goal setting, the winning edge sprinkled with humor and stories that you won’t hear anywhere else!