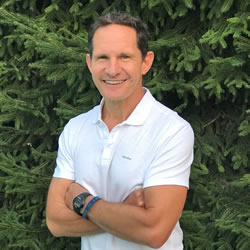 Dr. Murray Howe is Gordie Howe's youngest son. He is head of Sports Medicine Imaging for Toledo Radiological Associates and Promedica Health System's Sports Care program. An associate clinical professor at the University of Toledo Medical Center, he also serves on the University of Michigan Medical School Admissions Committee. Unlike his two brothers, Murray Howe failed in his attempt to follow in his father's footsteps to become a professional athlete. Yet, his failure brought him to the realization that in truth, his dream wasn't to be a pro hockey player. His dream was to be his father, Gordie Howe. To be amazing at something, but humble and gracious. To be courageous, and stand up for the little guy. To be a hero. You don't need to be a hockey player to do that. What he learned was that it is a waste of time wishing you were like someone else. We need to identify and embrace our gifts.

He has four decades of experience as a keynote speaker across Canada and the US covering various topics including sports medicine, health and wellness, and hockey.

Nine Lessons I Learned from My Father

This keynote is based on the book of the same name, based on the eulogy Murray wrote for his father, Mr Hockey Gordie Howe. It outlines his thoughts and memories, and makes sense of what his remarkable father meant to him. The result is nine lessons, built out of hundreds of stories, that show us the man behind the legend and give us a glimpse of what we can learn from this incredible life.

Nine Lessons I Learned from My Father

"In Nine Lessons, the one Howe son who never played professional hockey reflects on the more important things he learned from his dad, in a tribute that offers sweet inside stories that fans will lap up." - Chatelaine