One of TSN's Most Popular Personalities and Virtual Host and Celebrity 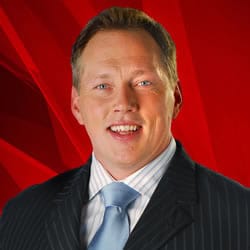 A TSN veteran, Dutchyshen is one of the network’s most popular personalities. He began his TSN career in 1995, hosting weekend editions of SportsCentre and hosting CFL Live. His engaging and unique personality, smooth delivery and sports knowledge have made him a viewer favourite.

Before joining TSN, Dutchyshen, a native of Porcupine Plain, Sask., spent seven years as the host of ITV’s Sports Night, a 30-minute sports news program in Edmonton. While in Edmonton, he also hosted a daily radio sportscast on 630 CHED for more than two years. Dutchyshen’s first job as a sportscaster was with STV in Saskatoon for one year, followed by a stint with IMTV in Dauphin, Man.