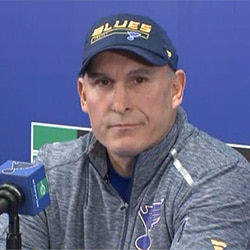 Craig Berube is one of just 321 men who has played in over 1,000 games in the NHL, which he did in stints with the Philadelphia Flyers, Toronto Maple Leafs, Calgary Flames, Washington Capitals, and New York Islanders. It is a truly astounding feat for anyone.

While Berube scored just 159 points in his 1,054-game tenure, that was never what he was kept around for. “Chief,” as he’s affectionately known due to his Native American heritage, was one of the most prolific fighters in the history of the NHL, as shown by his ranking seventh all-time in penalty minutes.

Though he was a “grinder,” Berube’s credentials as a player are a significant advantage as a coach. A thousand games played is a tremendous achievement, whether one gets there with his fists or with his wrist shots and the fact that he survived a thousand games while playing that physical a style speaks all the more to his grittiness. His career in the league has earned his players’ respect.

This is not Berube’s first round as a head coach. The Flyers also chose Berube as a mid-season head coach replacement when they fired Peter Laviolette after three games in the 2013-14 season. That year, Berube took the Flyers into the playoffs with a 42-27-10 record, earning them 94 points and third place in their division. They lost in the first round, but only after a long seven-game series with the New York Rangers.

Bring the excitement of the NHL and the cache of a NHL celebrity to your events, golf tournaments or corporate dinners by having Craig Berube act as your host, emcee or engage in a meet and greet.   As a local native to Quebec City, his tie to his community, success in the big leagues and his compelling, personal stories make Craig Berube a great speaker, as well.