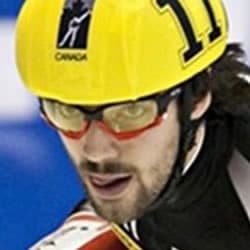 "These will be my Games."

After trading world titles in short track's glamour event with Dancing with the Stars winner Apolo Anton Ohno, Charles came into Vancouver looking to win an even bigger prize - an Olympic gold medal on home ice against his wildly popular American rival.

For the first 14 days of the 2010 Olympics, Charles Hamelin was still waiting for the hardware to back up his bold prediction.

On the final Friday evening of the Games, Charles claimed his moment. Then he did it again.

First, in a dramatic men's 500m, Charles edged Apolo at the line. Then, he skated with his brother François and the rest of the Canadian Relay Team to win again in under 30-minutes becoming the only Canadian athlete to claim two gold medals on home ice.

It was a race that even the Prime Minister called the most exciting event of the Olympics.

Double Olympic silver medalist Marianne St-Gelais, Charles' girlfriend, added to the emotion with a post-victory kiss that has become one of the most memorable and enchanting moments from the Games.

The Hamelin brothers, along with father Yves, the Team Manager, Short Track Team Leader for Speed Skating Canada, have become the first family of short track speed skating and will continue to add to their already legendary performances in the years to come.