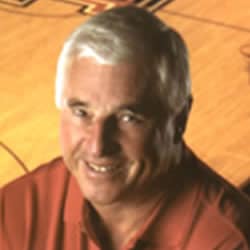 Bob Knight is his own man, one who represents high principles, expectations and demands for his players, his coaching staff and, most of all, himself. But he is foremost an educator. His ability to teach young men the game of basketball and the game of life is one of his most noted characteristics. Coach Knight has proven over and over again that he is the finest basketball coach in America. No other coach can cite NCAA and NIT championships and Olympic and Pan American gold medals among his achievements. There are only two coaches in the history of collegiate basketball who have won more than the three national championships Knight has won during his career.

Committed to mentoring, Coach Knight's coaching techniques and teaching skills place him in great demand as a speaker around the country. High school coaches flock to his clinics and his summer camp for youngsters is always filled to capacity with a waiting list.

Bob Knight's legacy stretches far beyond the realm of his numerous achievements and highly recognized status on the hard court. In August 2003, he was honored as the first inductee in The Vince Lombardi Titletown Legends. The honor and responsibility pays tribute to those individuals who possess the characteristics instilled by Vince Lombardi in all his players: Dedication, Teamwork, Respect, Love, Family and Discipline.

Bob is currently an analyst for ESPN College GameDay.

"The feedback we've gotten from our delegates has been phenomenal-I don't think they've ever given a standing ovation! Your tie-ins to the industry and our business were spot on. Thanks again for helping to make our conference such a great success!" American Frozen Food Institute

"Bob Knight was AWESOME! He was warm, funny, charismatic and had an on-target message. He was a STAR and I'm a FAN! It was a slam-dunk performance!" International Dairy Deli Bakery Association

"Bob was a wonderful keynote speaker, very dynamic and entertaining. He enthralled a crowd of 900 with his coaching stories. Needless to say he was a HUGE HIT!" Door & Hardware Institute

"Our event with Bob Knight was everything we could have hoped for! 1500 students enjoyed the advice and anecdotes of the Coach. He seemed truly interested in our students and in personalizing his speech, he made this event truly special.". University of Notre Dame