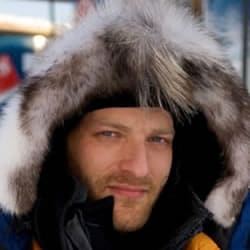 Ben Saunders is a record-breaking long-distance skier with four North Pole expeditions under his belt. He is the youngest person to ski solo to the North Pole and holds the record for the longest solo Arctic journey by a Briton. Since 2001, Saunders has skied more than 2,500km (1,500 miles) in the high Arctic and is currently preparing for three groundbreaking expeditions between 2009 and 2012.

Born in 1977, Saunders grew up in Devon, England, and was educated at the Royal Military Academy Sandhurst. He is passionate about the great outdoors and spent four months walking and climbing in the Nepalese Himalayas. At age 19 he became an instructor at the John Ridgway School of Adventure in the Scottish Highlands (once billed as 'the UK's toughest management training school').

Saunders is an extreme athlete. He discovered mountain biking in his teens and went on to race bikes on and off-road at a national level. He has run several marathons, two ultra-marathons, and aims to start competing in Ironman-distance triathlons in the future.

When he's not pulling a sledge, Saunders divides his time between planning and training for his next expedition and public speaking. His blue-chip list of corporate clients include Microsoft, IBM, GE, Bank of America and Apple, to name a few. Saunders is an Ambassador for The Prince's Trust, an Honorary Vice-President of the Geographical Association, and supports the Duke of Edinburgh's Award and the Orchid Cancer Appeal.

Starting in late 2009, Saunders will set out on three pioneering expeditions: solo speed record attempts to both Poles and the 2011-2012 Scott Antarctic Expedition - the first return journey to the South Pole on foot, and at 1,800 and nearly four months in duration, the longest unsupported polar expedition in history.

"One of the best presentations I've ever experienced... Ben's talk was absolutely brilliant. I was riveted to my seat just listening to him". Microsoft

"Ben is a great communicator. The feedback we got from the sessions that Ben ran with our people was superb. He is a polished public speaker, who has the ability to leave his script and tailor his comments to the audience. Whether you are looking to connect with senior board directors or 21-year-old graduates Ben will be inspirational." Ernst & Young

"Ben was very well received by the whole audience, which consisted of a range of people from accountants to directors. He was truly inspirational and people went away feeling they could achieve more." IBM