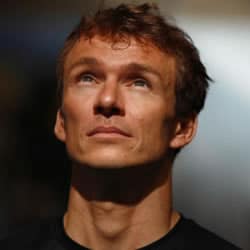 Simon Whitfield has relentlessly pursued excellence in sport - and in life - for as long as he or anyone around him can remember. As a youngster, his future gold medal-winning speed first showed up on the soccer pitch. At 11, he put his horsepower to use in his first triathlon when a family friend organized a race just north of his hometown of Kingston, Ontario. He entered, looking like a future professional "in boxer shorts with cows on 'em, and a Mickey Mouse hat," to meet the challenge of a friend.  He lost that challenge, but found a calling: getting serious about triathlon and honing his skills in the local Canadian Kids of Steel program.

"My goal was always to be the best in the world at something," says Whitfield, who at 17 followed that goal to Australia, a triathlon mecca and year-round training ground. Whitfield returned to Canada ready to take his racing to the next level.

He did that with a bang, surprising the world with a riveting come-from-behind victory in triathlon's inaugural Olympics, the Sydney 2000 Summer Games. Shedding tears of joy on the top step of the podium as the Canadian National Anthem played, at 25 Whitfield had reached triathlon's peak.

Whitfield's relentless pursuit, however, is not something that can be satisfied by a single race victory, no matter how significant. So Simon has continued to pursue his sport with a passion and professionalism second to none.  The rewards have followed the hard work: 12 national championships, 14 world cup victories, and, perhaps most significantly, in 2008 at the Beijing Olympic Games, in a race where he was counted out by everyone but himself, a stunning silver medal.

In the 2012 Olympics, Whitfield was the Canadian flag bearer for the opening ceremony. Unfortunately, a crash early in the cycling portion of his triathlon resulted in a gashed leg and broken collarbone, and he did not finish the race.

Whitfield's commitment extends beyond the racecourse.  He recognizes that with results come responsibilities, and takes very seriously his role as triathlon's ambassador to Canada and a Canadian ambassador to the world.  He supports numerous charities and loves few things as much as visiting schools to speak to children about finding their own passions and setting goals. The one thing he definitely loves more than anything else is his young family and his most important role of all: No matter what he's won, how hard he's trained or how tired he is after a day on the job, to his girls he's simply, Dad.

Simon Whitfield’s speaking of the relentless pursuit of excellence includes stories from the highs and lows of his career, all shared with the theme that the pursuit of excellence is it’s own reward. True greatness is in performing to the best of one’s ability and knowing that the reward is in the effort, not necessarily the outcome. Once you set and know your goal, don’t focus so much on the destination. Your focus and energy needs to be on the preparation and process throughout to give you the best opportunity to reach the goal.

Book Simon Whitfield
Simon is an inspiration to many Canadians. We believe his example of commitment, perseverance and supporting his community will inspire others to do the same. Boys school