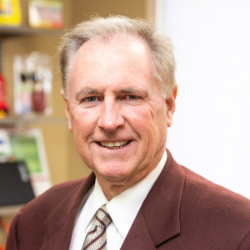 Ron Foxcroft was appointed to Canada’s highest citizen honour, the Order of Canada. He was named Entrepreneur of the Decade by Profit Magazine and named to the Burlington Entrepreneur Hall of Fame. He has been named Citizen of the Year in both Hamilton & Burlington. He is Chair of the Hamilton John C Munro Airport, the largest packaging freight airport in Canada.

Ron had an audience with the Queen at Buckingham Palace in 2015. He was the Honorary Colonel of the Argyll & Sutherland Highlanders during the tragic shooting of one of his regiment, Corporal Nathan Cirillo.

Ron officiated the 1976 Olympic Gold Medal Basketball Game. He enjoyed a distinguished career in the NCAA Men’s Basketball Division-1, highlighted by officiating Michael Jordan’s first college game and the Sweet 16. He chaired the Road to the Final Four NCAA Men’s First and Second Round Tournaments three times and chaired the NCAA Frozen Four, in Buffalo, NY. He was named by Referee Magazine as one of the 52 most influential persons in North American Officiating history. Ron has served 17 seasons with the NBA observing and evaluating the performance of NBA referees. In 2016, the National Association of Sports Officials (NASO) named Ron the recipient of the esteemed Gold Whistle Award, which is the officiating industry’s highest honour bestowed on a referee.

Today, Ron serves as CEO of Fluke Transportation Group and CEO of Fox 40 International, which he founded in 1987. Fluke Transport in 2020 is celebrating 100 years in business. Ron serves on many Boards of Directors, is involved with many charities, and continues as a motivational speaker.

Life as an Entrepreneur