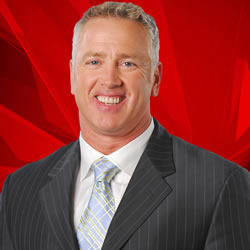 Following a successful college career at Louisiana Tech, Matt Dunigan broke into the CFL in 1983 with the Edmonton Eskimos. Dunigan played for six teams throughout his storied 14-year CFL career. He won two Grey Cups - 1987 with the Eskimos and 1991 with the Toronto Argonauts.

The All-Star quarterback passed for nearly 44,000 yards in his career and rushed 850 times for 5,031 yards and 77 touchdowns. Of these total yards, 713 yards came in a single regular season game against Edmonton when Dunigan played for Winnipeg - a CFL record that still stands.

Dunigan joined TSN in 1999, after beginning his broadcasting career as an analyst with the CBC at the 1989 Grey Cup and followed it up with another appearance in the CBC broadcast booth at the 1994 Grey Cup.

Dunigan teams up with host Dave Randorf and fellow analysts Chris Schultz and Jock Climie during the pre-game, halftime and post-game shows for TSN's CFL broadcasts. In 2006, Dunigan was inducted into the Canadian Football Hall of Fame.