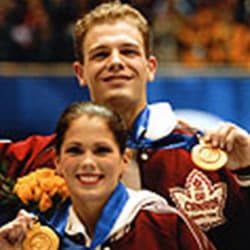 It was the story that rocked the 2002 Winter Olympics and directed the world's gaze to figure skating.

Canadian champions Jamie Salé and David Pelletier finished second to Elena Berezhnaia and Anton Sikharulidze by the narrowest of margins in the Olympic figure skating pairs final. The Russians were brilliant that evening, but Salé and Pelletier were even better, as close to perfect as could be with their classic Love Story free program. The International Olympic Committee upgraded their silver to a second gold after a public uproar, ensuing controversy, and an investigation revealed that a judge had succumbed to pressure to vote for the Russian pair instead.

Their competitive career behind them, they have since starred in international ice shows. The pair was married on December 30, 2005 in Banff.

Salé and Pelletier embody the true spirit of the Olympic ideal, and have established themselves as world-class athletes. Their performances have thrilled audiences across the country and the world, and to hear them tell their story is sure to do the same.