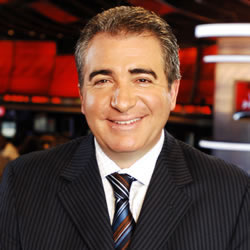 Reda joined TSN in the summer of 1988 as a reporter, recapping the overnight coverage of the Olympic Summer Games in Seoul, Korea. A strong and talented broadcaster, Reda was soon found splitting his time between reporting and anchoring the 2 a.m. ET edition of SportsCentre.

Reda began working in television in 1976 at a local cable TV station as a 16-year-old high school student in Etobicoke. Reda worked there until 1984 as the play-by-play commentator for numerous high school sports.

From 1983 to 1987, Reda worked as a freelance play-by-play announcer. In 1985-87, Reda hosted and produced a live weekly one-hour sports talk show on the Maclean-Hunter cable system, winning an award for best regular sports program both seasons.

From 1989 to 1994, Reda called the play-by-play action for lacrosse, amateur baseball, rugby and the Canadian cycling tour while continuing his reporting and hosting duties on TSN.

He joined Molson That's Hockey in 2001 after spending 14 years behind the desk of SportsCentre, TSN's flagship news and information program.