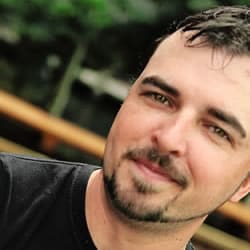 Scott Stratten is an expert in Viral, Social, and Authentic Marketing which he calls Un-Marketing: positioning yourself as a trusted expert in front of your target market, so when they have a need, they choose you.

Formerly a music industry marketer, national sales training manager and a Professor at the Sheridan College School of Business, he ran his "UnAgency" for nearly a decade before focusing exclusively on speaking. He has helped companies like PepsiCo, Adobe, Red Cross, Cirque du Soleil and Fidelity Investments find their way through the viral/social media and relationship marketing landscape. He now has over 124,000 people follow his daily rantings on Twitter and was voted one of the top 5 social media influencers in the world on Forbes.com. It's the only time he's felt comfortable being compared to Ashton Kutcher, P Diddy and Justin Bieber.

His book UnMarketing: Stop Marketing. Start Engaging became a national best-seller before it was released, and recently a Globe and Mail #1 Business best-seller, National Post, Amazon.com, Amazon.ca and Amazon UK best-seller. It was also named one of the top business books of the year by 1-800-CEO READ and one of the top 10 books of 2010 by Under30CEO.com.

His second book, The Business Book of (Un)Awesome, was published in the summer of 2012.

Scott's clients' viral marketing videos have been viewed over 60 million times and he has appeared in the Wall Street Journal, Huffington Post, USA Today, Entrepreneur Magazine, CNN.com, Inc.com and Fast Company. He was also named one of "America's 10 Marketing Gurus" by Business Review USA.

Scott's passion comes out most when speaking on stage, preaching engagement and becoming one of the most sought-out speakers on the subject.

From your front-line employees to angry customers online, the talking for your brand is no longer happening through a press release. Sales, marketing and customer service has changed incredibly over the past few years and engagement is king. It's not "if" your customers are talking online, it's "how often" and "where." This session walks the audience through the landscape of online engagement, leaving the audience with a clear picture of what tools will suit their needs and which ones to ignore.

Social media isn't a fad or one or two sites; it's the way your past, present and future customers interact. Are you there with them? It's not enough to just show-up, you need to build your social currency within certain platforms online to capitalize in social media. This session walks the audience through industry specific examples of what's gone wrong, whose doing it right, and most importantly, how they can start creating social currency right away.

Word of mouth is a wonderful thing, but if you're behind the times on how the word is spread, you (and your company) will be left behind. This session talks about the new way things go viral as well as what makes them work so well. It goes above and beyond the old "forwarded email" to capturing momentum within social media sites like Twitter, Facebook, YouTube and social bookmarking like Digg and Reddit. After creating online movies that have generated over 65 million views, as well as "homemade" style YouTube videos that get tens of thousands of views overnight, Scott walks the crowd through how he did it (including how he got www.Nooooooooooooooo.com to over 3 million visitors without spending a penny), what you have to avoid if you want to do it, and the keys to making it successful.

The Business Of Awesome (and UnAwesome)

This talk from Scott's new book covers key business concepts related to marketing, branding, public relations, social media, human resources and customer service. It's about the authentic touch, and the ability to connect technology with engagement to the level of Awesome. Including case studies of successful businesses that gained exposure through being awesome and effective, he provides actionable tools enabling audience members to apply the concepts immediately to their own businesses. The flip side: The Business Of UnAwesome, shares the train-wreck stories of unsuccessful businesses and showcases what not to do.

"One person even told me he stayed up all night after Scott's talk to rethink his entire approach to marketing his business. He was that inspired when he left." - Sloane Kelley, Co-Founder, GeekEnd

"An eye-opener of why, and how, we need to start shifting our marketing weight from the broadcast leg to the dialogue leg. And it doesn't hurt one bit that he made it the funniest and most entertaining presentation we all sat through in 2010.″ - International Marketing Director, Pepsi