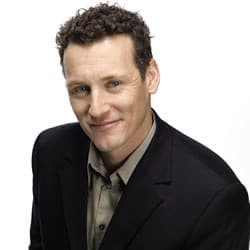 Scott Christopher is co-author of the best-selling The Levity Effect: Why It Pays to Lighten Up, the upcoming People People: How To Thrive Among Humans and contributing author of The Daily Carrot Principle and A Carrot A Day.

As a consultant on strengthening work culture with recognition and fun, Scott has circled the globe entertaining and motivating thousands of audiences from senior leader retreats to all-staff meetings. Applicable to all audiences in any industry, Scott's unforgettable messages and off-the-cuff humor illustrate firsthand how levity, humor and becoming a 'people person' enrich lives at work and at home.

In his rare spare time, Scott is a television host, emcee and actor (SAG), appearing on network television series Everwood, Touched by an Angel and in Disney Channel movies.

Scott has a Master's in HR Management from the University of Connecticut and while an undergraduate at Brigham Young University, Scott was honored with the United States' most prestigious acting scholarship, the Irene Ryan Award, at the Kennedy Center in Washington, D.C. A fluent Spanish speaker, Scott has delivered keynotes and day-long workshops in Spanish.

How successful people and organizations use fun, humor and 'lightening up' to achieve remarkable results.

Simple but powerful employee recognition that aligns with business strategies and pushes performance.

Minor adjustments at work and at home that produce major results.

The Levity Effect: Why it Pays to Lighten Up