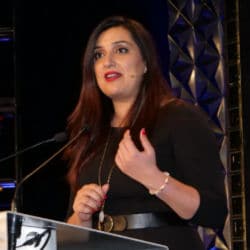 Samra Zafar is an award-winning international speaker, bestselling author, consultant, educator, and entrepreneur who advocates for gender equity, inclusion, and human rights. She has been recognized among the Top 100 Most Powerful Women in Canada, and a Top 25 Canadian Immigrant. Her book, A Good Wife: Escaping The Life I Never Chose, is an international bestseller and named among CBC's Best Books of 2019, and is now being adapted to a premium TV series. She is one of the youngest Alumni Governors at the University of Toronto, a Celebrated Ambassador for Plan International, and a board member for Women's College Hospital Foundation.

After arriving in Canada as a child bride and escaping a decade of abuse, Samra pursued her education as a single mother working multiple jobs and graduated as a top student from University of Toronto with several awards and scholarships. She began sharing her story to raise awareness about gender-based violence and has since become a globally recognized expert on equity and inclusion, violence against women, and mental health. Her speaking portfolio includes three TEDx Talks, and speeches to Immigration Refugees and Citizenship Canada, UNICEF, Yale University, Amnesty International, Art of Leadership, and many leading non-profits, corporations and universities around the world. Her work has been extensively featured in both Canadian and International media, including Washington Post, Huffington Post, National Post, Globe and Mail, CBC, CTV, Global News, Yahoo, and more - impacting tens of millions of people worldwide.

We are in a time of social awakening - where difficult but necessary conversations are shedding light on issues of systemic racism, discrimination, and the everyday experiences of BIPOC and other people belonging to minority groups. There is an increasing need to listen, understand, believe and be strong allies to support equity and remove barriers to inclusion. As an immigrant child bride to this country and an advocate for human rights and equity for over 10 years, Samra has traveled across the country and globally to learn and work with BIPOC and minority groups - from indigenous communities in rural Saskatchewan, Black communities in Toronto, South Asian communities in Alberta, to the executive towers of Bay Street. Samra uses her lived experiences combined with a deep understanding and education of these issues to educate, train, and offer practical implementable solutions to advance equity in the most authentic way.

Domestic Violence is on the rise during Covid-19 due to numerous reasons including increased isolation and frustration, and lack of financial stability. Workplaces can play a vital role in supporting their employees to deal with and leave abuse and safeguard their mental and emotional wellbeing. Samra has curated a few customizable topics to address this need, offering a combination of keynotes and training that will include information and practical tools that workplaces can start implementing right away.

Mental Health is the shadow pandemic of Covid-19. Rising isolation, financial uncertainty and inadequate support systems are resulting in heightened anxiety, depression and trauma for employees and families. Samra has developed and delivered a series of keynotes and workshops with the focus of providing practical and implementable positive psychology based tips, tools and strategies to build skills for resilience and mental wellbeing.

Many people have lost their loved ones, jobs and businesses through this pandemic. Many are having to pivot their careers into different directions. It is a time of uncertainty and ambiguity. In these keynotes and workshops, Samra helps people develop insights and skills to remain steadfast during times of uncertainty, stay true to their authentic self, and create a life and career of meaning and purpose.

Educating and Parenting Through Difficult Times

How can we help our children cope with trauma? What skills can we instill in our youth to help them develop emotional and mental resilience? How can adults practice self-care and role model positive behaviours? Samra uses her experiences of parenting a teen through mental health struggles, training educators across the country, as well as practices, resources and tools based on positive psychology to help parents build gratitude, resilience and grit in their children and youth.