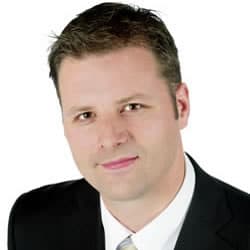 Rishaug, who joined TSN in 2004, reports on the Edmonton Oilers and Eskimos, as well as other sports stories in the Edmonton area. In addition, Rishaug has covered numerous high-profile events for TSN including the Olympic Games, IIH World Junior Championship and Stanley Cup Final.

From 2000 to 2003, Rishaug worked in Edmonton at CTV's CFRN as the weekend sports anchor before moving to the weekday six o'clock sports anchor desk. Rishaug is no stranger to TSN viewers, having appeared on the network as a sideline reporter for Wendy's CFL on TSN: Friday Night Football telecasts in 2003.

Rishaug attended the Broadcast Communications program at the British Columbia Institute of Technology. A sports enthusiast, Rishaug played right wing for one season in the WHL with the Kamloops Blazers.