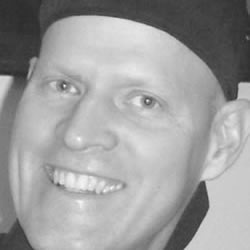 Mr. McBride is the founder and president of a Canadian-based management consulting group. Eighteen years ago, Mr. McBride started The Blackrock Group, which grew from one employee (Mr. McBride) to 650 full time staff, before he sold the majority of his interest in it three years ago.  Mr. McBride’s seminars are based on real world knowledge, experience and skills he acquired and used to build the Blackrock Group.  He has been Chapter Chairman of the Young Presidents Organization-Ontario Chapter, is a member of the Canadian Association of Professional Speakers (CAPS) & the National Speakers Association.  Mr. McBride is also listed in "Who’s Who in Canadian Business".

Mr. McBride has also dealt cross culturally by delivering seminars in countries as diverse as The United Kingdom, The United States, Hong Kong, The Philippines, Australia, Malaysia and The United Arab Emirates.

A dynamic businessman and creative thinker, Mr. McBride’s seminar style has been described as energetic, entertaining and real world oriented with highly usable eye-opening content.  World class companies, General Electric, Labatt and The Royal Bank, as well as medium and small enterprises have used Mr. McBride as a resource for improving the performance of their executives and staff.  Areas of focus include negotiation, sales, marketing, team leadership and management training.

Master of Influence - Marketing and Sales

How to Deal with Difficult People

"Mr. McBride was knowledgeable. The seminar was well paced and full of information with all kinds of good examples." Saturn Solutions

"Outstanding! A rare sharing of profound knowledge! I am writing to say how much I enjoyed attending the " Master of Negotiation " seminar recently. I felt the course content was very practical and effective and that it was time well spent. Anyone who doesn't take time to learn to be a better negotiator, and just as importantly, become aware of techniques that people use on us, does not understand the value and power of negotiations." President and CEO, Magna International Inc.

"I would recommend this seminar to my co-workers but not my competitors!"  Microsoft Inc.

"This seminar will do nothing but help you to profit both professionally and personally". General Motors