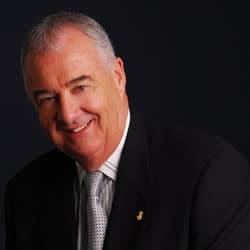 Peter Legge is an inspiration to anyone who meets him! He lives his life dream as an internationally acclaimed professional speaker, a bestselling author, and as Chairman & CEO of the largest, independently owned magazine publishing company in Western Canada - Canada Wide Media Limited.

His presentations are based on his everyday experiences as a community leader, husband, father and CEO. Peter has published fifteen books including, Make Your Life a Masterpiece, The Power of Tact, The Power of a Dream and most recently, 365 Days of Insights. His books have motivated thousands of people towards positive change.

Toastmasters International voted Peter "Golden Gavel Award Winner" and "Top Speaker in North America." Both the National Speakers Association and the Canadian Association of Professional Speakers have inducted him into their Speakers' Hall of Fame.

Peter is also a member of the prestigious Speakers' Roundtable, an invitation-only society comprising 20 of North American's top professional speakers. Peter has received honorary doctorate degrees from Simon Fraser University and Royal Roads University, and an honorary doctorate of technology from BCIT.

In 2005, Peter was presented with The Nido Qubein Philanthropist of the Year Award in Atlanta, Georgia. In 2006, Peter was awarded the Ambassador of Free Enterprise by Sales and Marketing Executives International in Texas. In December 2006, The Peter Legge Philanthropist of the Year Award was introduced by The Canadian Association of Professional Speakers. Peter is the first recipient of this award.

In June 2008, the province's highest award, The Order of British Columbia was presented to Peter for his life-long commitment to serving the community.

Are you worried about the current state of the North American economy? Do you feel like your strategy just isn't having the same impact as it was? With more than 35 years as a successful entrepreneur, Peter Legge will tell you that in good times and bad, the fundamentals of success don't change, we just have to be reminded from time to time about what they are and how to apply them in the current economic climate. You'll be amazed at how just a few small adjustments in your strategy can make a big difference in the results you get.

The Runway of Life: Take Charge and Live Your Dreams

Life, like a runway, is limited in length. Let Peter Legge show you how to make the most of it and live your dreams with his life-changing Runway of Life lessons. Dream big and set goals, because the first step to achieving a dream is having one. Discover your talents and your purpose. When the two intersect there is no limit as to what you can achieve. Embrace entrepreneurship and learn how everything you do - even the efforts that fail - propels you toward success. Harness the dynamic qualities of enthusiasm, a positive attitude and unshakable tenacity. Use your time effectively to gain the greatest rewards.

A born storyteller with an entertainer's wit and sense of timing, Peter takes audiences on an inspirational journey through 27 simple and easy-to-implement habits that cumulatively have the power to change your life and your fortunes. During this unique seminar, supported by a hands-on workbook, Peter will help you...

Taking on the Giant: How to Meet the Challenges of Leadership

Peter Legge, Chairman and CEO of Canada Wide Media (the largest independently owned publishing company in Western Canada), knows what it takes to be a successful leader. His more than 40 years of first-hand business experience form the core of this powerful, often funny and always entertaining seminar on what it takes to be effective in the leadership role.

In the famed biblical story of David and Goliath, all it took for young David to slay the giant was five smooth stones, a sling, and a lot of focus. In this acclaimed seminar, Peter Legge uses this timeless tale of triumph over adversity as a vehicle for exploring what it takes to prevail in life and in business. Peter talks about the five key elements necessary to overcoming obstacles and realizing your full potential: Leadership, Motivation, Perseverance, Personal development, and Success. Peter's stories will inspire and entertain you while adding deeper meaning and dimension to his five key points.

Make Your Life a Masterpiece - Take Control of Your Canvas of Life For Success!

Based on Peter's bestselling book of the same name, this keynote presentation teaches ways to carve out a successful destiny that is distinctly yours. With the warmth and humor Peter is world renowned for, he artfully draws from his own canvas to deliver the ideas and attitudes you need to create your own masterpiece. Learn how your distinctive style and one of kind experience is key to being the master of your own destiny. Understand that while your circumstances may determine the colors that you have to work with, the choices that you make day-to-day are in fact, the brushstrokes that will define what your Masterpiece looks like. Peter's Masterpiece presentation is a palate of timeless lessons and entertaining stories from his book.

It's Not Enough To Do Things Right, Do The Right Things: Leadership Principles for Life, Business and Success

What are you doing today to become the leader you want to be? Peter Legge learned at a very early age that leadership is never given, but rather taken and based on the important principles instilled in his youth, His company, Canada Wide Media Limited is a Canadian success story - celebrating 35 years in business without ever having lost money. Under his leadership, Canada Wide has established a track record for success that is the envy of many businesses. "Given the fact that 50 per-cent of all new businesses fail in the first year, 50 per-cent of the remaining 50 per-cent fail in the second year and 50 per-cent of those left fail in the third, it is my father's lessons that have helped Canada Wide Media to be a successful company for 35 years," explains Peter. In that time, we have never lost money - ever! And we have an impeccable reputation and respect in the community." Let Peter share with you seven principles that have worked for him.

The 16 Irrefutable Laws of Salesmanship

Mastering the art of salesmanship isn't about selling products, it's about building relationships with people. The most important secret in salesmanship is to understand what the other fellow wants, then help him find the best way to get it. Let master salesman and entrepreneur Peter Legge, the powerhouse behind Western Canada's largest independently owned publishing company, be your guide as you learn the techniques and principles practiced by all of the highest paid salespeople every day. Having trained and mentored top performers in numerous fields for more than 30 years, Peter's lessons will show you how to increase your sales faster and easier by adopting the action-oriented habits of those top performers.

How to Soar With the Eagles

The Runway of Life

If Only I'd Said That

Make Your Life a Masterpiece

The Power of Tact

The Power to Soar Higher

"I wanted to tell you just what an incredible experience it was to listen to Peter. He was the best. We were inspired and very touched by Peter's life experience stories, particularly regarding his Dad and when he concluded, it was a major crescendo. It's difficult to find the right words when something you experience is that great and very emotional." Blue Streak