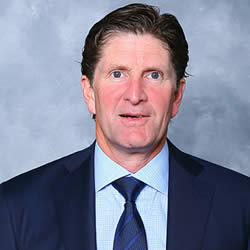 Mike Babcock is the former Head Coach of the Toronto Maple Leafs and Detroit Red Wings. Considered one of the most successful coaches in professional hockey history, he is the only coach ever to win a Stanley Cup, Olympic Gold Medal and World Championship title. Babcock combines his exceptional insight into leadership, teamwork and goal setting with unique stories from playing hockey in the minors in Saskatoon, Saskatchewan to coaching NHL greats.

Mike Babcock began his NHL coaching career with the Anaheim Ducks in 2002, leading them to the Stanley Cup Finals in his first season. In 2007, he became the coach of the Detroit Red Wings, which he quickly led to a Stanley Cup championship. In spring 2015, it was announced that Babcock would be the new head coach of the Toronto Maple Leafs.

Babcock’s success has also spilled over into the world of International Hockey. At the 2010 Vancouver Winter Olympics, he coached the Canadian men’s team to a memorable gold medal victory. That gold medal game, an overtime thriller against Team USA, was a galvanizing moment for Canadian sports fans—for all Canadians—and became one of the most watched programs in the country’s history. He repeated this feat at the 2014 Sochi Winter Olympics, coaching the team to another gold medal win.

Babcock has written a book about his experiences. Leave No Doubt: A Credo For Chasing Your Dreams has been applauded by sports fans and professionals alike for its encouraging messages of vision, teamwork, destiny and effort. He’s also an active mental health ambassador, using his Babcock’s project to raise money to support the mental health of young athletes and de-stigmatize mental illness in the sports community. Babcock’s natural leadership and in-depth knowledge of the game have made him one of the most successful and inspirational coaches of the past decade. His teams all display the virtues that Babcock himself prescribes to: discipline, heart, strength of will, and sportsmanship.

Bring the excitement of the NHL and the cache of a NHL celebrity to your events, golf tournaments or corporate dinners by having Mike Babcock act as your host, emcee or engage in a meet and greet.  As a local native to Saskatoon, SK, his ties to his community, success in the big leagues and his compelling, personal stories make Mike Babcock a great speaker, as well.