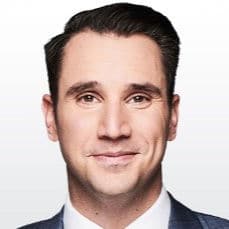 Mark Roe is currently an anchor/host for SportsCentre, TSN Hockey, and TSN Tennis, including coverage of the Grand Slam tournaments, THAT’S HOCKEY, and the IIHF World Hockey Championship. Roe is also a host on TSN Radio 1050, occasionally appearing on LEAFS LUNCH.

Roe joined TSN in 1998, interning for Michael Landsberg’s OFF THE RECORD before getting hired on as a story editor. In 2008, he stepped away from TSN to begin his on-air career with CTV News Barrie as a sports anchor and sports director. He placed emphasis on telling the stories of local athletes and teams including the Barrie Colts of the Ontario Hockey League.

Roe later joined the NHL Network in 2012 as host of NHL Tonight and NHL on The Fly. Throughout his time at the NHL Network, he reported from the sidelines at Stanley Cup Finals, NHL drafts, Winter Classic games, Stadium Series, and the 2014 Winter Olympics.

A Ryerson University Radio and Television Arts program alumni, he was a member of Ryerson’s varsity volleyball team, and captained the team for the 2006-2007 season.