This content will show up directly in it's container. 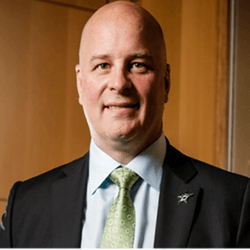 Jim Montgomery joins the Stars after spending the previous five seasons as the head coach of the University of Denver men's hockey team. He amassed a 125-57-26 record and was the second-winningest coach in college hockey during that span.

Montgomery led Denver to back-to-back trips to the Frozen Four (2016, 2017) and helped the Pioneers capture the 2017 National Championship. Additionally, he guided Denver to five consecutive NCAA Tournament appearances as the team reached the NCAA Tournament every season he was at the helm. Montgomery posted a 70-35-15-9 mark within the National Collegiate Hockey Conference (NCHC) over those five seasons to make the Pioneers the winningest program in the five-year history of the conference. During his tenure at Denver, the team also earned two NCHC Tournament Championships in 2014 and 2018, as well as being crowned NCHC Regular Season Champions during the 2013-14 regular-season. A two-time finalist for the Herb Brooks Award as NCHC Coach of the Year (2016, 2017), Montgomery won the Spencer Penrose Award as national coach of the year in 2017.

He also spent four seasons as an assistant coach at Rensselear Polytechnic Institute of the NCAA's ECAC from 2006-10. Montgomery began his coaching career at Notre Dame of the then-Central Collegiate Hockey Association, serving as an assistant coach for the 2005-06 campaign.A former center, Montgomery played in 122 career NHL games with St. Louis, Montreal, Philadelphia, San Jose and Dallas.

Bring the excitement of the NHL and the cache of a NHL celebrity to your events, golf tournaments or corporate dinners by having Jim Montgomery act as your host, emcee or to engage in a meet and greet. As a local native of Montreal, Quebec, his ties to his community, success in the big leagues and his compelling personal stories make Jim Montgomery a great speaker as well.