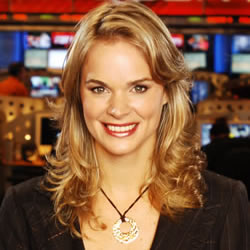 Jennifer Hedger is the co-host of the 10p.m. ET edition of SportsCentre alongside Darren Dutchyshen. Hedger offered viewers regular updates, scores and highlights from around the league.

She was the Whistler host of CTV Olympic Prime Time during the Olympic Games in Vancouver, and will host the 2012 London daytime broadcasts alongside James Duthie.

Hedger, who joined TSN in March 2002, is no stranger to TSN fans having made several appearances on Off The Record with Michael Landsberg, where she quickly became a favourite with viewers and was voted one of the Top 5 guests of the year.

Prior to joining TSN, Hedger hosted numerous shows on a local station in her hometown of London, Ontario, and on community television. Hedger also appeared as a 'lofter' on the 2001 TV show The Lofters. In 2007, she was rated by Hello! Magazine as one of the Top 10 Most Beautiful Women on Television.