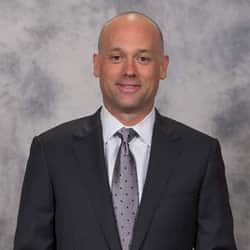 As the only coach in the Grand Rapids Griffins’ history to qualify for the Calder Cup playoffs in three consecutive seasons, Jeff Blashill took this experience to the NHL in 2015 when he joined the Detroit Red Wings as their head coach.

Blashill is the 27th coach in franchise history, the first American to lead the Red Wings and just the third Michigan native to coach any major Detroit sports team. A goaltender in his playing days, he is the only person in league history to win the Clark Cup as both a player and head coach.

Bring the excitement of the NHL and the cache of a NHL celebrity to your events, golf tournaments or corporate dinners by having Jeff Blashill act as your host, emcee or engage in a meet and greet.   As a local native to Sault Ste. Marie, Michigan, his ties to his community, success in the big leagues and his compelling, personal stories make Jeff Blashill a great speaker, as well.