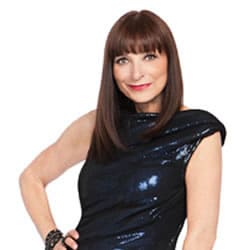 Born in Toronto, Jeanne Beker began her career in show business at the age of 16 and since then has never looked back. A mother of two teenage girls and fashion guru extraordinaire, today, Jeanne is one of the most iconic and influential women in the fashion industry both here at home and around the world.

Throughout her career, Jeanne produced daily lifestyle and entertainment features for 1050 CHUM radio station; she co-starred in the Iris-Award winning music magazine-style show The NewMusic, later becoming the entertainment anchor and reporter for the station's news program CityPulse.

In 1985, Jeanne began hosting FashionTelevision, which is still the most accessible fashion program in the world today. Jeanne has helped pioneer fashion on the Internet with American communications giant MCI, when she became editorial director of fashion in 1995 - the web's first fashion site.

Jeanne is now the editor-in-chief for FQ Magazine and SIR Magazine and a regular featured columnist with The Globe and Mail. Jeanne is a published author with her autobiography Jeanne Unbottled: Adventures in High Style, The Big Night Out and Passion for Fashion: Careers in Style. She is also a judge on Canada's Next Top Model and Style Correspondent on CTV's Canada AM and eTalk. She is recognized by numerous organizations for her ongoing community involvement and influence in the fashion world.

Jeanne accepted the Vantage Women of Originality Award (awarded to women who are pioneers in their chosen field). She was also the recipient of the Variety Club Diamond Award and received the prestigious Crystal Jury Award in 2006 from Women in Film and Television, for her exceptional achievements in Canadian television. Past Honorary Chair of Toronto's Annual Fashion Cares, Jeanne currently sits on the honorary board for Gilda's Club Greater Toronto.