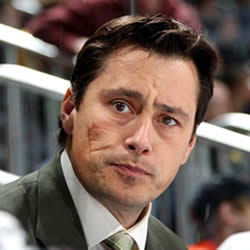 Boucher was the head coach of the Ottawa Senators from 2016-2019. He was also the head coach of the Tampa Bay Lightning from 2010–2013 and SC Bern from 2014–15. He previously coached in the Quebec Major Junior Hockey League. He has coached various Canadian international teams. With a Master’s degree in Sports Psychology, Guy’s leadership style is founded in science as well as experience. Never boring, Boucher is a charismatic presenter with stories and insights from hockey’s elite.

Boucher has also represented Canada on the international stage on several occasions. He won a gold medal as an assistant coach at the 2009 IIHF World Junior Championship in Ottawa and also helped Canada win the Spengler Cup in Davos, Switzerland, in 2015. It marked his second consecutive year behind Team Canada's bench at the tournament which is often recognized as the oldest invitational ice hockey tournament in the world. Finally, he has also served as an assistant coach with Canada's National Men's Under-18 Team on three occasions, including in 2008 when the team won a gold medal in Kazan, Russia.

Boucher has a prominent scar on his right cheek. When asked how he received it, Boucher said “it’s not hockey related” but has refused to elaborate.

Bring the excitement of the NHL and the cache of a NHL celebrity to your events, golf tournaments or corporate dinners by having Guy Boucher act as your host, emcee or engage in a meet and greet.   As a local native to Notre-Dame-du-lac, Quebec, his ties to his community, success in the big leagues and his compelling, personal stories make Guy Boucher a great speaker, as well.