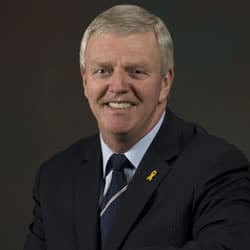 Born in Newfoundland and Labrador, Rick Hillier joined the Canadian Forces as soon as he could, graduating from Memorial University of Newfoundland, where he recently served as Chancellor, and joined his first combat unit in Petawawa, Ontario, in 1976. Throughout his career, Rick has had the privilege and pleasure of serving with and commanding troops from the platoon to multi-national formation level within Canada, Europe, Asia and the United States.

In 2003 Rick was appointed as the Commander of Canada’s Army and later that year was selected as the Commander of NATO’s International Security Assistance Force in Afghanistan. Rick was promoted to General and assumed duties as the Chief of the Defence Staff for Canada on 4 February 2005 and retired from the Canadian Forces in July 2008, after more than 35 years, wearing Canada’s uniform. He loved every minute of it.

Rick now focuses on leadership and contribution to his country through work, leadership and charitable endeavors to support a variety of causes, mostly centered around veterans and their families.

Rick and his very patient wife Joyce have two sons, Chris and Steven, two daughters in law, Caroline (Chris) and Amanda (Steven), two grandsons, Jack (14) and Matthew (10) (Chris and Caroline) and two very young granddaughters, Olivia (3) and Ava (1), (Steven and Amanda). Rick and Joyce reside in Ottawa and, often, in Newfoundland, and during cold winters, in Florida.

A talk on leadership in tough times based on lessons learned from the school of hard knocks. Illustrating leadership lessons through the stories of the men and women who represent our country around the world, supported by their families, and doing the toughest jobs imaginable. Their leadership, proven and real, can serve to guide leaders in every part of our society, because they have absorbed that leadership is all about people.

“General Rick was a hit.  He was very inspirational and one of the best speakers we have had at any of our conferences.  His presentation on Leadership was very engaging, with a mix of humour and inspirational and moving stories.” Recipes Unlimited, Dec 2019

"Warm, witty and wise, General Rick Hillier is an electric speaker who charges his audience with enthusiasm and is an ideal choice for any conference. After a long day of presentations and panel discussions as part of our International Transportation Summit, General Hillier stepped to the podium to deliver an address on Canada's military role in the world and the men and women who define that role. His personal anecdotes and slide presentation put a human touch on the Canadian Military and the families that support them. General Hillier engaged and charmed the crowd, with his fast-paced, information-packed and emotion-filled address. He moved grown men to tears. Need I say more?"Atlantic Provinces Trucking Association

"Unstoppable. Immensely persuasive. Steeped in Newfoundlander charm. Magnetic leader. More impressive than any politician in Ottawa. Ask about a soldier named Rick Hillier and the superlatives never cease." The Globe and Mail