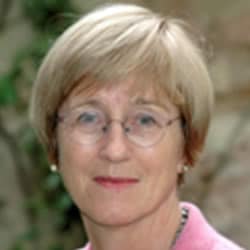 Journalist Frances Cairncross is one of the UK's most respected economic commentators. Formerly Management Editor of the Economist, she has held senior positions at The Times, The Banker, The Observer and The Guardian and presents BBC Radio 4's Analysis programme. Her broad-based knowledge of economics encompasses environmental change, the internet and mass communications.

Prior to becoming Rector of Exeter College in October 2004, she was The Economist's first Environment Editor, and in that capacity published two books on the subject, Costing the Earth: The Challenges for Governments, the Opportunities for

Her latest book, The Company of the Future, was published in 2002 by Harvard Business School Press. In March 2003 she won the Institute of Internal Auditors' annual award for business and management journalism. She is also the author of The Death of Distance, a study of the economic and social effects of the global communications revolution, first published in 1997 and re-published in a completely new edition in 2001.

As a business speaker, she draws on her wealth of experience to provide insightful and practical assessments of the economic scene. On the issue of climate change, Frances argues that policies that prepare the world to adapt to it are now just as important as efforts to slow it down. She relates these issues to the corporate world in her presentation, Business and the Environment - Friends or Enemies?

As a futurist, Frances examines the forces that will shape twenty-first century businesses and economies. She also speaks on the subject of the internet and the global communications revolution, which she examined in her book The Death of Distance. She discusses how the web will change companies and outlines how businesses, governments and environmentalists can make common cause.

Executive director of Stramongate Ltd, and a regular presenter of BBC Radio Four's Analysis programme. In 2004-05, she held the honorary post of High Sheriff of Greater London.

Business and the Environment – Friends or Enemies?

Examines how companies can respond to and lead environmental change.

Shaping the Future: Seven Top Trends for the Coming Century

This talk looks at the main factors likely to shape the coming century, including demography, technology and globalisation.

The Death of Distance

How does the internet and associated technologies alter the world for companies, for society and for government?

Green Inc.: A Guide to Business And The Environment

The Death of Distance: How the Communications Revolution is Changing Our Lives

The Company of the Future: How the Communications Revolution is Changing Management