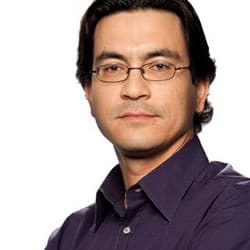 Duncan McCue has been a reporter for CBC News in Vancouver for 12 years. His award-winning news and current affairs pieces are featured on CBC's flagship news show, CBC News The National.

McCue's recent honours include a network RTNDA Award for Best Long Feature, and his second regional RTNDA Diversity Award for his coverage of aboriginal issues.

He is also an adjunct professor at the UBC School of Journalism, and has taught journalism to indigenous students at First Nations University and Capilano College.

Before becoming a journalist, Duncan studied English at the University of King's College, then law at UBC. He was called to the bar in British Columbia in 1998.

Duncan is Anishinaabe, a member of the Chippewas of Georgina Island First Nation in southern Ontario.