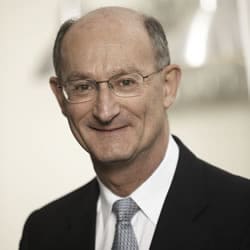 Dr. David Posen graduated from the University of Toronto Medical School in 1967.
He was involved in a research project in San Francisco before interning in Edmonton, Alberta.  After a year of general practice in the Canadian Arctic he spent a year practicing in Jerusalem.  In 1971 he started a family practice in Oakville, Ontario.

He is the author of three best-selling books, Always Change A Losing Game, Staying AfloatWhen the Water Gets Rough and, most recently, The Little Book of Stress Relief, now in its eighth printing and translated into five languages.  His magazine articles have appeared in Canadian Living and Readers Digest as well as several medical journals.  He wrote a weekly column on stress and lifestyle management for a year on the popular website www.canoe.ca. David has appeared many times on TV and radio across Canada and has been quoted in many leading U.S. magazines such as Redbook, Cosmopolitan, McCall’s, Men’s Health and USA Weekend.

In addition to his busy schedule of seeing patients, writing and public speaking, he is an avid reader, golfer, musician and tennis player.

Most of the stress that most of us have is self-generated. We drink too much caffeine, get too little sleep, have unrealistic expectations, overload our schedules, etc. I playfully call these "losing games". The principle from sport to "Always Change a Losing Game" applies equally well to life situations. The key is to identify our losing games and find ways to change them.

You Have More Control Than You Think:

When people feel stressed, they often feel a loss of control (and vice versa). An important way to lower stress is to increase feelings of control. This presentation explores how to take control of the three parts of our lives over which we have the most control: the way we think, the way we behave and the lifestyle choices we make. By taking more control in these areas we have much more energy and resilience to deal with the external stressors in our lives over which we have the least control.

Bank accounts work on a simple premise: you have to put money in before you can take money out. Our bodies function the same way. We need to generate and store energy before we can use it. Our bodies are beautifully designed to summon quick energy in stressful situations, but we need rest and recovery time between episodes of stress to restore our energy for the next time it’s needed. This interesting and entertaining presentation looks at ways to reduce stress and generate energy at the same time.

The New Stress Research Is In " Our Grandmothers Were Right!

People often ask what’s new in the field of stress. Ironically, a lot of the new research is simply confirming (with elegant science) what our grandmothers knew generations ago: good nutrition, adequate sleep, regular exercise, relaxation and social support all pay off. This presentation explores the new findings that support the old ideas " and playfully shows how getting back to basics will make a huge difference.

Stress: The Epidemic We Can’t Avoid:

This presentation acknowledges that stress is a fact of life and even though we can't relieve it entirely, we can reduce it to manageable levels. It explores where stress comes from and tips and techniques for reducing its impact.

Dealing With Pressure At Work and In Life:

As life speeds up, most people point to external pressures as the reason why they feel overloaded. However, we also put pressure on ourselves. This presentation looks at how we create this pressure and how we can reduce it.

Managing Stress in a Stressful Environment:

Today's workplace has become very dynamic and demanding. In many jobs relentless deadlines, fast-pace and high workloads are the norm. There are ways of managing stress even in these difficult environments. This presentation explores some helpful solutions.

Dealing with the Stress of Success:

There's an old piece of wisdom that says, "Be careful what you wish for". Many people who have struggled to get ahead find that stress doesn't diminish with success - they simply trade one set of problems for another. This presentation looks at how to manage your stress and your life once you reach the level of success you've been striving for.

This presentation is especially appealing to visual learners. It uses diagrams to help participants understand how we function, where stress comes from and how to solve the problems that lead to stress.

Taking Care of the Caregiver:

This presentation is primarily for people in the helping professions (nurses, doctors, therapists, etc.) But it also applies to people caring for elderly or ailing relatives and family members with special needs. Care-giving is draining, both physically and emotionally. This presentation helps caregivers understand the importance of pacing themselves and taking care of their own needs even while they take care of the needs of others.

How to Enjoy Holiday Stress:

December is both a hectic and a joyous time for many people. It's also one of the most stressful times of the year. This presentation looks at some of the causes of holiday stress and specific strategies for reducing the stress in order to enjoy the season more.

The Beliefs That Run Our Lives:

This fascinating presentation looks at an important but often overlooked factor influencing our reactions and behaviour. We have literally thousands of beliefs about how the world works, how people should behave and about ourselves. We hold these beliefs to be "The Truth", so they become "The Truth" for us. Most of our beliefs are subconscious which makes them even more powerful. With numerous examples and humorous anecdotes, this keynote talks about the power of beliefs and what to do about them.

Is Work Killing You?

The Little Book of Stress Relief

Staying Afloat When the Water Get Rough:How to Manage Your Life in a Rapidly Changing World

"Thank you for the outstanding job you did presenting to our staff at last week’s retreat.  In fact "outstanding" might be an understatement.  Your style, message and your rapport with our group could not have been better".  University of Florida.

"The content of the presentation was right on mark; a perfect blend of anecdote, medical science, humour and advice that resonated beautifully with our audience".  Warner Bros. Entertainment, California.

"You were an overwhelming success!!  The majority of our staff rated your seminar EXCELLENT".  Nortel

"Dr. Posen was so enthusiastically received that we had great difficulty in bringing his particular session to a close".  The Canadian Institute of Credit & Financial Management

"...thank you for what was an absolutely fantastic presentation.  Your comments were practical, timely and relevant to the issues we face in our office and in our profession.  We all appreciated the humour that was in such good taste".  Deloitte & Touche.