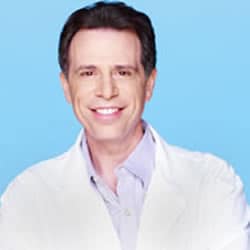 Dr. David Greenberg is currently on staff at St. Joseph's Health Centre where he plays a leadership role in the areas of Family medicine, Obstetrics, and Continuing Medical Education.

David graduated from the University of Western Ontario in 1989 and returned to Toronto to practice in the house in which he grew up, alongside his father, Dr. Joe Greenberg. He was later the Chief of Family and Community Medicine, and Chief of Emergency Medicine at Doctors Hospital, a community hospital which had taken a leadership role in the industry wide transition to a focus on Ambulatory care. He was also the Chairman of Continuing Medical Education.

David played a leadership role in developing the soon to be released Men's Health Guidelines, an internationally peer reviewed document developed to ensure that GP's have the proper resources to look after this segment of the population.

He is recognized as a skilled communicator, able to effectively convey highly complex issues and concepts in a straightforward and entertaining manner. He has become a highly sought after speaker, delivering addresses on a broad range of topics across North America and Europe. He has hosted several educational videos for both physicians and patients and has appeared on many television and radio programs dealing with healthcare issues.

Dr. Greenberg has written a variety of educational articles, which have been published in popular medical journal. David was the co-editor of the 2007 and 2008 "Canadian Clinical Practice Guidelines"a compilation of 32 different clinical guidelines distributed to 22,000 doctors across Canada.

In 2005, "Dr. Dave"became a regular on "The Mom Show", a national program designed for moms (and dads) to provide insight into medical, parenting and relationship issues for modern families. The show has been syndicated around the world, and remains one of the most popular shows of its kind in Canada.

The popularity of his segments on "The Mom Show" led "Dr. Dave" to host his own show, "Dr. in the House"which premiered in January 2008, and continues to provide his audience with practical information on a variety of medical and related topics. Those shows continue to be shown regularly, and, in addition, "Dr. Dave"is now a regular contributor to "Cityline."