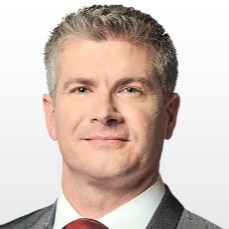 Originally from Peterborough, Ont., O’Toole’s broadcasting career began at Algonquin College where he did play-by-play for the Ottawa 67s. Following his graduation, O’Toole moved to Vancouver in 1997 where he reported on traffic from a four-seater plane for CJJR-FM and CFUN-AM.

Prior to joining TSN in 2002, O’Toole was part of Citytv’s launch in Vancouver, where he worked as an anchor and reporter. Beginning in 2003, O’Toole was paired with Onrait at the Sportscentre anchor desk. Over the duo’s decade-long run (2003-2013), the pair became known for their humorous take on sports news and highlights, and their Sportscentre broadcasts evolved into a pop culture phenomenon in Canada with a dedicated and passionate fan base.

A veteran sports broadcaster, O’Toole hosted Sportscentre with Onrait live from Trafalgar Square during the London 2012 Olympic Games, and hosted alongside Cory Woron from the International Broadcast Centre for the Vancouver 2010 Olympic Winter Games.

Prior to re-joining TSN in 2017, O’Toole and Onrait co-hosted Fox Sports Live.