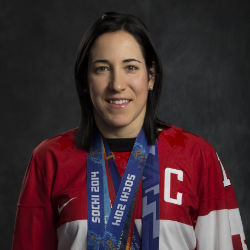 Caroline Ouellette’s record speaks for itself.

A pillar of Canada’s national hockey team from 1998 to 2015, she has also been a source of inspiration through the years as a player for the Montreal Les Canadiennes, winning 4 Clarkson Cup and the University Minnesota-Duluth Bulldogs winning the 2003 and 2008 NCAA National titles. The Montreal-born athlete has enjoyed an impeccable Olympic career.

The forward contributed to winning gold with two goals during the four most decisive games. Ouellette was also the hero of the World Championship final in Burlington, US, in 2012. Her winning goal, scored in overtime, ensured the Canadians’ sixth gold medal in 11 years. Caroline participated in 12 IIHF World Championship earning 6 Gold medals. She was an assistant captain with the National team from 2006-2013 and captain of the 2014 Sochi team.

Caroline is now coaching with the National team program. She has two daughters and is married to American Olympian Julie Chu.

Caroline is fully bilingual and is a regular speaker sharing stories of discipline, teamwork & leadership.

Dealing with Changes, Expectations, and Adversity

"I cannot thank you enough for the amazing talk you gave to my agents. The comments from everyone could not have been more positive. Don't change anything ! Your delivery was perfect and many said exactly that: "honest, sincere and from the heart."
David A. Mellor - President David A. Mellor Consultants - Royal Lepage Heritage

"Your presentation is very powerful and impressive. As I toured the tables after and chatted with my guests, men and women alike were telling me they cried or had goose bumps. The messages, the videos, the photos, the homage to your team, parents, … it all just works so well and you deliver it so perfectly. Much of what you said resonated with all. Your experience in recognizing how to work within a team environment is so comparable to our corporate setting with all the different departments having to work together and understand their own roles within the company. What you were saying maybe helped people understand how to embrace their roles and be the strongest link they can within that chain. Your selfless expression of this was so humbling to the audience. "
Lynn Martel - President - Dormez-Vous