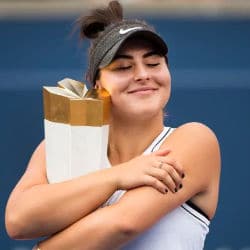 Bianca Andreescu was born June 16, 2000 and is a Canadian professional tennis player. She has a career-high ranking of No. 4 in the world, making her the highest-ranked Canadian in the history of the Women's Tennis Association (WTA) rankings. Andreescu is the reigning champion at the US Open and the Canadian Open, having defeated Serena Williams to win both titles.

She is the first Canadian tennis player to win a Grand Slam singles title and the first Canadian to win the Canadian Open in 50 years. Andreescu began playing tennis in her parents' home country of Romania before returning to Canada where she was born. She had success as a junior, winning the Orange Bowl and two Grand Slam doubles titles with compatriot Carson Branstine en route to reaching a career-best junior ranking of No. 3 in the world. After not playing any matches at the WTA Tour level in 2018, Andreescu had a breakout year in 2019, beginning with a runner-up in her first event of the season, the Auckland Open. She then rose to prominence by winning the Indian Wells Open, a Premier Mandatory tournament. Although she missed several months due to injury, Andreescu qualified for the WTA Finals at the end of the season and finished the year ranked No. 5.

ProSpeakers.com is a sports speakers bureau and marketing agency. We work on behalf of our clients to get the best booking price for the desired speaker. In addition to arranging appearances and speaking engagements, we represent corporations, PR firms and other organizations hiring sports stars for advertising campaigns, marketing campaigns, endorsements, new product launches, publicity events, fundraisers, trade shows, conventions, meet and greets, and product launches. We do not exclusively represent Bianca Andreescu. Athlete booking fees are deemed to be reliable, but not guaranteed and can change at any time due to the demand, travel schedule, event location or other factors.