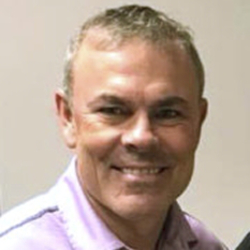 Hockey player, Adam Oates, played 19 seasons in the National Hockey League. Known as an elite playmaker, his career total of 1,079 assists was the fifth highest total in NHL history at the time of his 2004 retirement. After retiring as a player, he served as an assistant coach for the Tampa Bay Lightning and New Jersey Devils prior to joining the Washington Capitals as their head coach for two seasons. He is currently head coach of the New Jersey Devils.

Oates had perhaps his best season in 1992-1993, as he scored a career-high 45 goals, 97 assists and 142 points to finish third overall in regular season scoring behind Mario Lemieux and Pat LaFontaine. The next season, Oates again finished third with 32 goals, 80 assists, and 112 points, behind Wayne Gretzky and Sergei Fedorov.

Oates was inducted into the Hockey Hall of Fame in 2012.

Adam Oates is available as a motivational speaker, personal appearance/autograph signing, fundraising event or endorsement. Any appearance by the personable Oates will reflect well on your company.