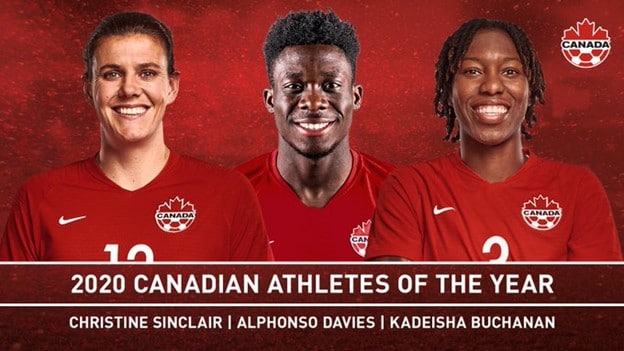 Christine Sinclair was recently named Canadian Press Female Athlete of the Year after becoming the world’s all-time leading international scorer in 2020. A most recent article in the Globe & Mail outlines Christine amazing accomplishments.

Sinclair’s made her mark representing Canada and made history in January while helping her national team book its ticket to the Tokyo Olympics. As someone who grew up watching Sinclair — and admiring her ability to find open space and be a threat in the attack every time she’s on the ball — it’s no surprise that she’s continuing to be recognized for her talents

The Canada and Portland Thorns captain surpassed retired USWNT legend Abby Wambach’s record of 184 international goals with 185 of her own. At 37, Sinclair proves that age is just a number, and she’s now the only soccer player to win the Bobbie Rosenfeld Award as the Canadian Press Female Athlete of the Year.

With 296 international appearances, 186 goals and 55 assists, Sinclair is an inspiration and has helped paved the way for younger generations that’ve grown up watching all of her accomplishments.

To hire Christine Sinclair or other Canadian Athletes for a Virtual Speech contact ProSpeakers.com.